On Sunday October 8th, undeterred by a somewhat unattractive departure time of 5am and rotten weather (rain), fifteen souls headed into the wet dawn at Mokaihaha Ecological Area, approximately 10 km east of Tokoroa.  Around 2137 hectares in size, the Ecological Area is the largest surviving block of a once extensive mixed podocarp-tawa-kamahi forest which blanketed the crest and western fall of the Mamaku Plateau.

The Department of Conservation and the Mokaihaha Kōkako Trust and volunteers are undertaking possum and rat control in the Ecological Area to help safeguard the resident native fauna.  This forest is home to a range of threatened fauna including a significant population of kōkako which occupy a core area of approximately 850 ha in the north-western corner of the reserve. 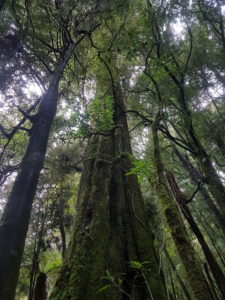 Photo (C.Beard) one of the many giant podocarps in the Mokaihaha Ecological Area (this one a kahikatea).

As the countour of the area is relatively flat we had to be careful not to become too botanically distracted in the dull light and falling rain; relying on marked bait lines to eventually guide us back to our starting point on the western boundary of the reserve.  The trip was not only enjoyable from a plant perspective; much to our delight it was the rare treasure of kōkako song that accompanied us early into our walk.  Over the course of the day kaka, whitehead, grey warbler, morepork (and even a black-backed gull) also made themselves known.

Thanks to Katherine Hay (Project Coordinator Mokaihaha kōkako recovery project) for organising the trip and keeping an eye on the wandering botanists! 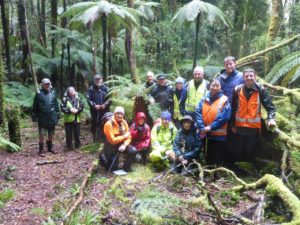